for “The Middle Way” journal of The Buddhist Society, August 2018

My teacher, Ajahn Brahm, and I founded Anukampa Bhikkhuni Project to strengthen Buddhism by growing the sangha of bhikkhunis – or fully ordained female monastics – on UK soil.

We aspire to establish a Forest Monastery in England and so make the authentic teachings of early Buddhism accessible and the liberating potential of the bhikkhuni way of life available for women today. The project’s name captures these objectives: Anukampa means empathic compassion which acts wisely to alleviate suffering.

Ajahn Brahm will be coming to teach in December in support of this aim- his third such visit. A much-loved meditation master, his retreat booked up within two days! We also organised a July retreat with exemplary scholar-practitioner Ajahn Brahmali, elucidating the whole of the Noble Eight-fold Path. The Buddhist Society have also graciously hosted both teachers on our behalf and we greatly value their support.

The Stirrings of a Spiritual Path

You may wonder what led me to undertake a project of such enormity. Well, I think it lay as something of an inevitability on the path of renunciation that brought me here.

As to why I first chose this way, I could suggest the inner-stirrings of a spiritual path arose in me as a grumpy, rebellious teenager or perhaps as a nineteen-year-old traveller to India on a one-way ticket; but no: in a more undefinable sense, the Buddhist path chose me.

By fifteen, my hometown felt confining. International news of devastating violence and abject poverty troubled me greatly, feeding existential angst. I decided to travel through a sense of urgency to discover why we suffer and inflict so much harm upon each other. I also intuited that by stepping aside from societal and cultural expectations, I might discover the meaning of my life and a compassionate response.  After nearly two years of incredible yet ultimately wearying adventures throughout Asia, I embarked on the journey of my life – to my inner world.

On my first silent retreat, with SN Goenka, I met an unruly mind. Thankfully, the instruction to root awareness in bodily sensations helped steer me toward observing the body-mind interaction in the present. As the great Ajahn Chah said:

“Where you experience suffering, you can also find freedom from suffering. To try to run away from suffering is actually to run toward it. Investigate suffering, see its causes, and put an end to them right now, rather than merely dealing with their effects.”

As mindfulness revealed the changing, impersonal nature of phenomena, grasping seemed increasingly futile, whereas calmly observing things passing like fleeting winds in the sky, bestowed equanimity and peace. I knew I had found my purpose in life- a Path to end suffering and experience lasting peace- and what an enormous relief! 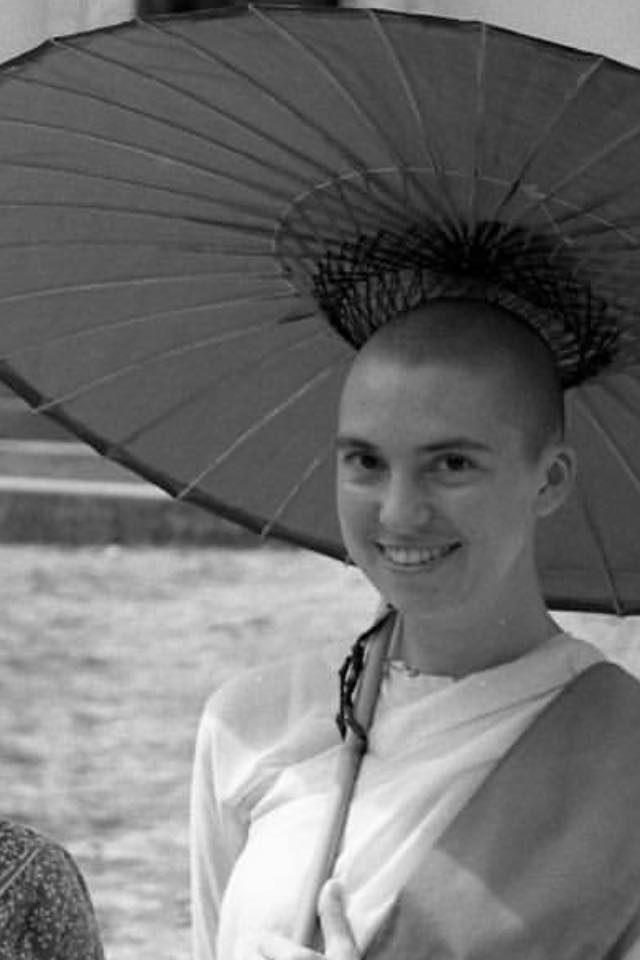 Thoroughly inspired, I attended and volunteered service on scores of retreats throughout Asia and beyond, and nothing beat the satisfaction of seeing others’ lives transformed. As confidence in the Buddha grew, I sensed I could go deeper and help others more profoundly by renouncing as a nun. I finally found an opportunity ten years after that first retreat, in swelteringly hot rural Burma. There was no electricity nor a paved road for the two-mile approach from the poor neighbouring village, to which our monks walked barefoot daily for alms.

Even so, practice conditions were in place: Noble Teacher, simple food, tatami sleeping mat and roof. The teachings were in Burmese, so I would take my cassette recordings to the one English-speaking monk, who would help transcribe and decipher their meaning. Through this arduous method, I came to understand all instructions and around half of the daily Dhamma talk. I felt utterly supported by a teacher who clearly understood my mind; my meditation progressed and I resolved never to leave. 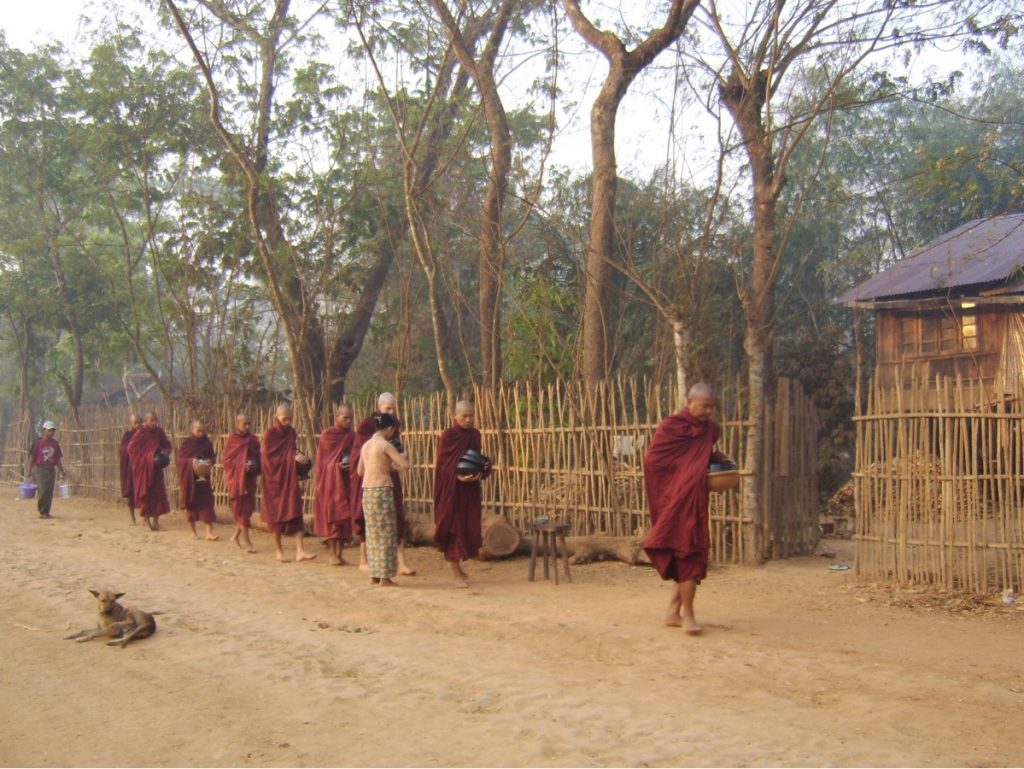 Blessings can come in heavy disguise! Four years in and the climate, food and intestinal parasites had made me seriously ill and my practice plateaued. Fortuitously, this coincided with discovering the rains retreat teachings given by Ajahn Brahm, on a CD player in my hut. It was exhilarating to hear profound Dhamma in English from someone who understood western cultural conditioning and I resonated instantly with Ajahn’s emphasis on kindness, letting go and the happiness of peace. A subtle mental shift, from passively observing the causes of suffering to inclining toward the causes for bliss, opened up new areas of practice. On a leap of faith, in 2010, I left Burma to seek his guidance.

Full Ordination Down Under

For two years, I lived a peripatetic life in Europe. Kind friends and various monasteries generously offered temporary shelter, enabling me to survive short-term in robes, but some Theravada Buddhists considered my ordination inferior to that of monks and this isolated me from community and longer-term support.

During this time, I met Ajahn Brahm and his compassionate presence and stories of forest bhikkhunis practicing in Australia inspired me. He and his Sangha were of the view that nuns could ordain on an equal footing to men. Other scholar monks too, such as Bhikkhu Bodhi and Bhante Analayo, had done their research: there was no legal (vinaya) obstacle. Inwardly, it felt completely natural and, of course, it was ethically sound. In Ajahn Brahm’s words:

“Some nuns are happy living on ten precepts, just as some same-sex couples are happy living together without being married. But that is no excuse for putting obstacles in the path of other women who want to take full ordination as Bhikkhunis, as the latter is no excuse for stopping same-sex marriage. If a woman wants to eventually take Bhikkhuni ordination, she should not be prevented from doing so. The Buddha recognised that men and women were equally capable of Enlightenment, so he gave them equity by establishing the Bhikkhuni Sangha.”

My heart leapt to hear full ordination was possible in modern times and that it might be possible for me! Eventually, in 2012, I had a chance to visit Ajahn at his home monastery in Perth and ordained as a bhikkhuni in 2014. In the ceremony, I felt literally “lifted up out of compassion,” (as the chanting goes), by an international Sangha of bhikkhus and bhikkhunis dating back to the Buddha. Along with three fellow ordainees, the Sangha exhorted me to make use of this precious, hard-won opportunity for nothing short of full liberation.

The Birthing Of Anukampa And How You Can Help

I was residing at Dhammasara Monastery, one of a small handful of bhikkhuni monastery’s in the western world, when Ajahn Brahm suggested we start a new monastery in England. I did not know where to begin, but when he committed to being a trustee and teaching to help raise funds, people started coming on-board. My first-hand knowledge of the struggle surviving as a nun entails motivated me- and I also knew many exemplary nuns who had disrobed or left their monastery to seek higher ordination overseas.

I have now been working without a base or handling money (figure that one out!), for nearly three years. There are many steep learning curves ahead but inexpressible gratitude for the teachings I have received and for Ajahn Brahm’s steadfast support injects joy into every step. I still join long solitary retreats yearly in Perth and feel additionally privileged to serve Anukampa so future generations may have an easier ride.

Ajahn Brahm’s first teaching tour in 2016 reached over a thousand and elicited great interest in our monastery aim. Our volunteer team worked tirelessly to ensure a smooth flow of events. Attendees included people around the world who were profoundly touched by wise teachings delivered with humour and warmth. Soon afterwards, a substantial anonymous donation brought our aspiration within reach. Since then, Ajahn has delivered a second, similarly far-reaching and inspiring tour. I have also been teaching at numerous Buddhist societies and groups and it is gratifying to see spiritual friendships blossoming among our supporters.

We now need more managerial and administrative help to organise high-quality retreats and manage our growing team of volunteers. We also need a lawyer for our Trust and a web-content manager. Fund-raising initiatives are always welcome, too. After Ajahn Brahm’s upcoming December tour, the search will be on for a three-bedroom flat (possibly in rural Devon), from where I will visit London monthly for teaching and project meetings. The flat would accommodate me and an overnight guest, caretaker or monastic aspirant, and welcome day visitors to offer the midday meal. A decent sized reception area would enable us to host regular meditation and Dhamma sessions for women and men alike, until we are ready to expand.

This is an extraordinarily exciting project to be involved in and messages of support continue to uplift us. One volunteer eloquently expressed it this way:

“Some may wonder what might motivate us to give so much energy to all this work. The answer is fairly simple: because the wish to find perfect, unshakeable peace has been calling to the human heart throughout the ages, and the real question is who wouldn’t want to devote themselves to creating supportive conditions to see that wish fulfilled?”

As we endeavour to bring this vision to life, I am filled with gratitude for the inspiration, guidance and support of the Buddha, my teachers and fellow bhikkhunis; and meditators everywhere who give their whole heart to the practice, gently, authentically and with great courage and love.