Ayya Anandabodhi and Ayya Cittananda are much-loved, wise bhikkhunis and have both taught online for Anukampa before. They kindly wish to support our community during Ven Canda’s vassa, or rains’ retreat  (they have their longer retreat in the winter time), by offering a couple of teacher-led sessions each. These take place on the 1st Sunday’s of each month, ending in October. Sessions include a guided meditation, a themed Dhamma Talk and an opportunity for Q&A.

Lia and Shirley will facilitate peer-led groups on the 3rd Sunday’s of each month, ending in October. These sessions include a silent meditation, a videoed Dhamma talk or documentary, a community discussion and an opportunity to share in small groups. Please do come along to benefit from and contribute to supporting our Zoomi Bhikkhuni community. As the Buddha famously said: “Spiritual friendship is the entire spiritual life.” SN 45:2

…to be continued, watch this space!

JOINING LINK: The joining link is the same as for our regular Sunday sessions, see our archive newsletter here.

N.B You will need to be signed in to your personal zoom account to access all meetings. For technical information on how to join please click here: Joining Zoomi Bhikkhuni

ABOUT OUR GUEST TEACHER 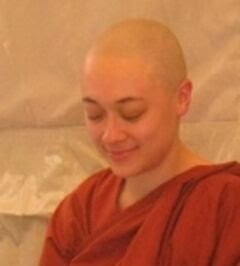 Ayya Cittananda has spent many years on the Buddhist path, after an inspiring philosophy class at university led her to spend time practicing in monasteries. After completing a Bachelor’s of Science in Nursing and working at a hospital as a registered nurse in Texas, she lived as a novice nun at a small Pure Land/Chan monastery in Florida for a year before moving to California. She spent two years living and working in Redwood Valley, made daily visits to Abhayagiri Buddhist Monastery, and sat several long retreats at various monasteries and meditation centers. She left Redwood Valley in 2013 in search of a place to ordain as a Theravadan nun, spending six months at the Ajahn Chah lineage monasteries in England and Scotland. She also spent seven months at Aloka Vihara in Placerville, helping the nuns settle into their new monastery. Ayya Cittananda took Anagarika precepts at KBV in March of 2015, Samaneri ordination in April of 2016, and Bhikkhuni ordination in May of 2018 at Buddhi Vihara in Santa Clara, California. She lives at Karuna Buddhist Vihara, a small bhikkhuni hermitage located in the Santa Cruz mountains in northern California. 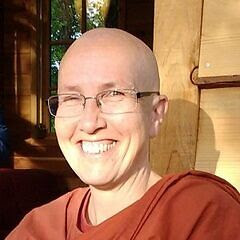 Ayya Anandabodhi, originally from Wales, has lived as a Buddhist nun in the Forest Tradition since 1992, spending 17 years in Amaravati and Chithurst monasteries before moving to the United States in 2009 to help establish Aloka Vihara, a Buddhist monastery for women. In 2011 she took full ordination as a bhikkhuni, with Ayya Tathaaloka as her preceptor, joining the growing number of women who are reclaiming this lineage given by the Buddha. Her practice combines meditation in nature, studying the early Buddhist suttas and living in community. She teaches Dhamma on a regular basis in her local area and occasionally further afield, and is an advisor to Anukampa Bhikkhuni Project.