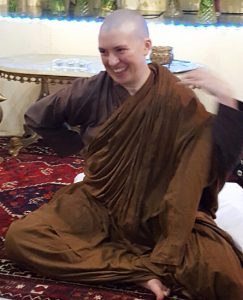 Sanghamitta day is held annually in honour of Ven. Bhikkhuni Sanghamitta, the fully enlightened (Arahant) daughter of Buddhist Emperor Asoka, who, along with her brother Mahinda, went to Sri Lanka, to establish the Bhikkhuni Sangha in that country. She arrived by sea, carrying a sapling of the same Bodhi tree under which the Buddha awakened to the Four Noble Truths. The sapling was planted at Anuradhapura in 288 BC and is the oldest known living tree. Sanghamitta day is one of the six major Buddhist holidays and celebrates the great contribution of women to Buddhism.